The leaders were in the company of the Deputy President during a church service at A.C.K St. Luke’s Wang’uru Church in Mwea Constituency, Kirinyaga County, where they addressed the church gathering.

The two lawmakers referenced Waiguru’s sentiments made on Saturday, August 21, during a Mt. Kenya leaders’ retreat in Laikipia County, where the Kirinyaga Governor said she had not yet settled on a candidate for the presidential position.

Gachagu, who started by lauding Ruto’s efforts in addressing the welfare of Kenyans, mocked Waiguru for going back on her promise to Raila that she would back him.

“I would like to call on Governor Waiguru and other Mt. Kenya leaders behind Raila Odinga. You went to Murang’a and promised to support Raila Odinga, three days later you want to retract your words and say you never endorsed Raila,” stated the MP.

The lawmaker went on to ridicule Waiguru, labeling her as a “flip-flop” who is now getting cold feet as the 2022 General Election beckons.

Gachagu accused Waiguru of embarrassing the ODM leader for not being a loyal friend. He sarcastically argued that Raila had suffered enough betrayal in the past for him to have to endure another betrayal as elections near.

“If you promised Raila, do not lie to him; he has suffered for a long time. Do not embarrass us by going back on your word with how you flip-flop on your support for ODM leader Raila Odinga. You have wronged the man by backtracking, and it is manifestly wrong to abandon your promise” chuckled Gachagua.

Ndindi Nyoro on his part accused Waiguru and Mt. Kenya leaders of holding meaningless meetings and not prioritizing discussions about the region’s interests.

“All the meetings you hold in hotels, having tea and mandazi and pretending to be discussing the uniting of Mt. Kenya people should stop,” said Nyoro.

The Deputy President who attended the service resorted to avoiding the topic of Waiguru, and instead took a swipe at Raila and One Kenya Alliance leaders for pestering President Uhuru Kenyatta to help them make political arrangements for the 2020 General Election.

“They should leave the President alone and let him do his work now. You do not need the President to arrange you. The Building Bridges Initiative is behind us, and the idea of dividing government positions is now a thing of the past,” stated the Deputy President. 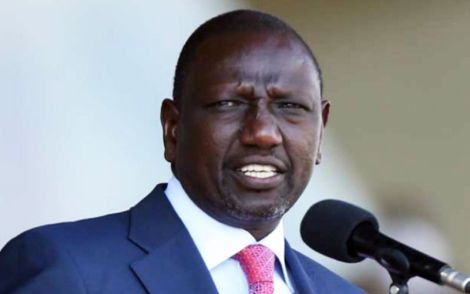 I write for the silent: Chidzvondo