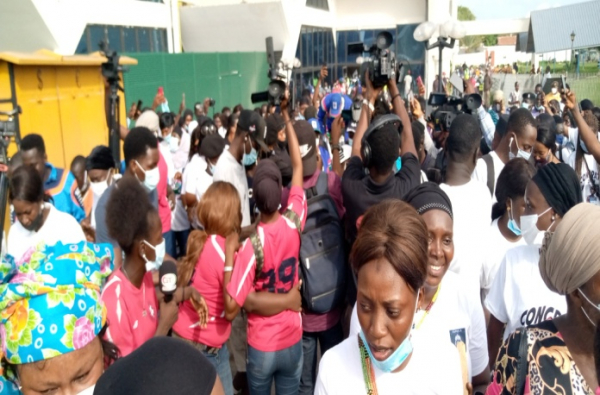 Hundreds of fans and loved ones stormed the Banjul International Airport to show love and appreciation to the Gambia’s field and track Olympians (Gina Bass and Ebrima Camara).

“DIG Sowe concluded by announcing that a piece of land has been purchased for Gina to be built to completion and handed over to her in honour of her accomplishment. He said this gesture is necessitated by Gina’s excellent representation of the country,” according to Poliso.

The Gambia was this year represented by three athletes (Gina Bass, Ebrima Camara and Faye Njie).

Both Gina Bass and Ebrima Camara participated in the 100m and 200m, while Faye Njie took part in Judo but the Gambian trio was not fortunate to make it to the finals.

Speaking to the press, the captain of the Gambia National Olympic team, Adama Jammeh, though he couldn’t make it to this year’s Olympics, expressed happiness at the country’s participation in the quadrennial Games.

“It was a good participation from the Gambian team though it was not the first of its kind that Gambia has been to the Olympic with athletes going to the semifinals in the various events,” he said.

“All I want to say is big congratulations to my fellow athletes for representing us well. This is what we can do for our country, if we go out and do well for ourselves. The nation has to be very proud of us,” he said.

According to him, Gambians don’t concentrate much on athletics, adding that they (as athletes) want to continue excelling for both themselves and the country.

Meanwhile, the Gambia’s field and track queen Gina Bass was given a new car as a means of encouraging her to do better.