The rapid spread of the Delta variant of the coronavirus in many parts of the world has spurred fresh curbs on mobility and driven down energy consumption, including in China.

Oil fell for a fourth day, marking its longest run of losses since March, pressured by a rising dollar and economic data illustrating the U.S. recovery’s uneven path.

Futures declined 1% on Tuesday. The dollar climbed, weakening the appeal of commodities priced in the currency. U.S. retail sales fell in July by more than forecast, while factory production strengthened the most in four months. Data from China on Monday revealed a slowdown in the economy last month.

“Poor data coming out of China is ground zero for reignited global concern surrounding Covid-19,” says Phil Flynn, senior market analyst at Price Futures Group. “Although indicators in the U.S. shows a better situation than China, as the second largest economy, what happens in the region has huge market impact.” 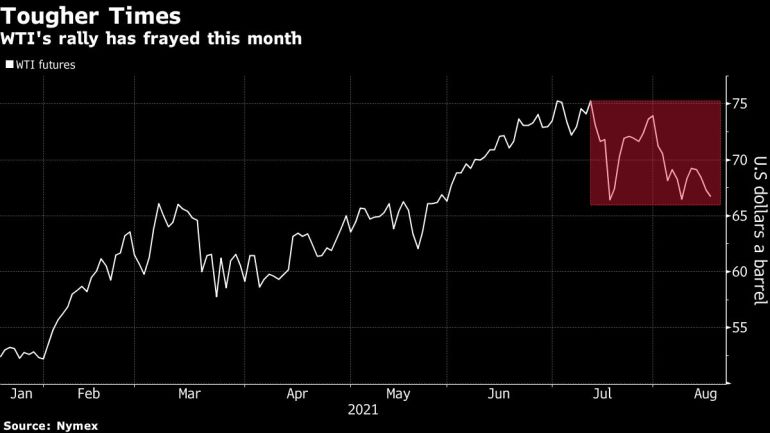 After a vigorous rally in the first half of the year, crude’s advance has been checked in recent weeks. The delta variant has spurred fresh curbs on mobility in many nations including China, harming energy consumption. Against that backdrop, JPMorgan Chase & Co. has been among banks reducing oil price forecasts.

“China is the world’s engine for participated demand growth,” says Thomas Finlon, director of Energy Analytics Group LLC. “When demand shows signs of a downturn, you can be sure the effects will spread.”

While demand has been challenged, the Organization of Petroleum Exporting Countries and its allies including Russia have stayed the course in relaxing their output curbs imposed in the early phase of the pandemic. Supplies will rise by 400,000 barrels a day this month.

With prices softening, OPEC+ delegates said they don’t see a need to accelerate the revival of output, despite a call from U.S. President Joe Biden last week for the cartel to restore more production to bring gasoline prices down. The group’s next regular meeting is set for Sept. 1.

Will Joe Biden pay a political price for Afghanistan?

Which offers the best protection: A COVID infection or vaccines? | Coronavirus pandemic