Speaking during a church service in Ngong on Sunday, August 22, Mudavadi stated the Building Bridges Initiative (BBI) was unsuccessful because of President Uhuru Kenyatta and Raila Odinga’s brinkmanship, which saw any critic of the process declared an enemy.

He accused the two leaders of micro-managing the BBI process and not opening it up for the input of other national leaders.

“When leaders just decide that it is their choir that will sing and nobody else should be listened to, the consequences are very grave,” the former Nasa principal claimed.

He accused the President and ODM party leader of making the BBI push about them, making it a one-man show. He also faulted them for refusing to listen to the views of critics.

The former Vice-President referred to his address at the Bomas of Kenya, where he warned the leaders that they would face difficulty in having the BBI conversation if they did not pull everybody together.

According to Mudavadi, the proposed bill turned out to be a political elite document and not a document that was aimed at addressing the problems facing common Kenyans.

He also revealed that in a second meeting at Bomas, he cautioned the leaders against interference with the independence of institutions, especially the Judiciary.

“I cautioned that if you try to get the executive to appoint an ombudsman to the court, you will be interfering with the independence of the court,” Mudavadi reiterated, drawing reference to how he was booed.

Quoting the president of the Court of Appeal, Justice Daniel Musinga, Mudavadi stated that introduction of the ombudsman not only interferes with the independence of the Judiciary but also the basic structure of the constitution.

His comments follow the Court of Appeal ruling on Friday, August 20. The appellant court upheld the ruling issued by the High Court, which had declared the BBI unconstitutional, null and void.

Mudavadi added that it was time for the country to move on after investing a lot of energy and resources in the BBI debate for close to three and a half years. 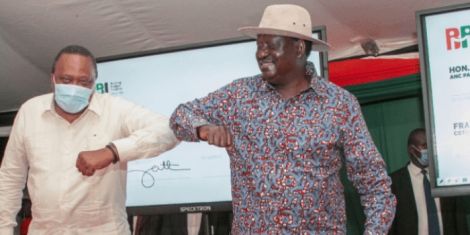 President Uhuru Kenyatta and Raila Odinga at KICC in Nairobi for the National launch of BBI signatures collection exercise. November 25, 2020.

The price of liberty | Tribune Online