Eritrea: May – A Month of Dignity

The year 1991 was a watershed in the history of Eritrea and Ethiopia. After a hundred years of foreign rule, the people of Eritrea, under the leadership of the EPLF, became victorious. After thirty years of armed struggle, Eritrean freedom fighters defeated the military government of Ethiopia and entered Asmara on May 24, 1991. When the EPLF drove out the Derg, it also won the mandate to rejuvenate Eritrea. At long last, the great, courageous and industrious people of Eritrea have stood up with pride and dignity.

In 1991, the colonial rule was terminated and Eritreans established an independent and sovereign country and a government of their own. The people of Eritrea have become masters of their own country and hold their future in their own hands. The national charter of Eritrea adopted at the third congress of the EPLF in February 1994, states that “achieving national independence and sovereignty is the conclusion of an important chapter in the history of the people of Eritrea, yet at the same time, the beginning of a new chapter.”

May 24, 1991 marks the beginning of a new national life of the State of Eritrea that is now 30 years old. Thirty years may be quite many for a person’s age but it is a mere speck in the life of a nation. Thirty years ago the people of Eritrea were a colonized people subjected to humiliation, indignity, uncertainty, extrajudicial killings, arbitrary arrests, rape, pillage and all sorts of oppression. They were not treated as people that deserve rights and dignity.

The people of Eritrea were suffering and being humiliated under successive foreign occupations. For hundred years since the formation of Eritrea (1890-1991), Eritreans were under the Italian, British and Ethiopian rule. In those years of humiliation, Eritreans never ceased to struggle against racial segregation, colonization and dehumanization perpetuated by the colonizers.

The armed struggle for independence was long, bitter and costly, but it constitutes a glorious chapter in the rich pages of the Eritrean history. The valiant and successful struggle of the Eritrean people ultimately led to the restoration of dignity and rebirth of Eritrea. The struggle for independence today enjoys the respect, admiration and affection of all Eritreans. It continues to serve as the symbol of indomitability in adversity, of courage when confronted by danger, of dignity and resolve when threatened with defeat, and of magnanimity and generosity in victory.

Thanks to independence every Eritrean today has secured the right to life, property and happiness. We are enjoying the right to be treated in a manner befitting human dignity with access to free education and health care, and our personal lives and property protected. Every year we celebrate the good that has been achieved over the decades since independence and we know exactly the areas where we still need to make progress.

The post-independence period has not been as smooth as envisioned. The TPLF regime unleashed a new war against Eritrea barely seven years after liberation under the pretext of border dispute. The vicious war that raged for two long years inculcated much loss of life and huge economic devastation. The TPLF’s subsequent malicious policy of adversity and flagrant violation of international law further impeded Eritrea’ steady progress on national building and economic growth in all its dimensions. These formidable obstacles notwithstanding, substantial achievements have been made in education, health-care, and other essential sectors.

Every people want to be treated with dignity and know whether or not they are being treated with the dignity they believe they deserve. The dignity of the Eritrean people has been acknowledged and respected by the international community after the de facto and de jure declaration of independence. Indeed, national independence emboldens the worthiness, nobleness and honor of the people. 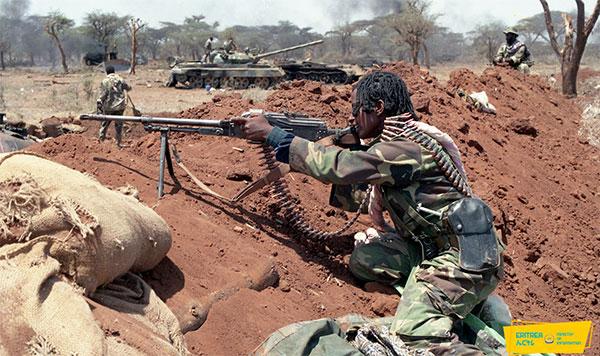 The heroes and heroines of the Eritrean revolution, fathers and mothers of this nation, were wise. Our forefathers’ resolve to destroy the yoke of colonialism and humiliation is what gave birth to an independent Eritrea. The thirty years of struggle was for dignity. In other words, the struggle demanded not only the ousting of colonizers but demands respect. The claim of human dignity is that simply being human makes one worthy or deserving of respect. May 24, 1991 opens a new window of opportunity and gives Eritreans a means to realize their potential. The victory of 1991 reinforced the national effort to rid Eritrea of the humiliation it had suffered at the hands of colonizers and to restore it to a position of dignity and greatness.

Eritreans understand the dangers of sticking to the past. After the suffering they had undergone in the struggle for independence, they sought to look to the future rather than stay stuck in the past. They consciously chose to forgive but not to forget. Forgiveness is a door to peace and development. The people and leadership of Eritrea have never hesitated to live in peace with their former colonizers. They did not allow the acid of hatred and vengeance to corrode their souls and poison their hearts. While celebrating our independence, we extend our mercy and forgiveness and have opened a new chapter of construction. With the signing of a peace and friendship agreement with Ethiopia in July 2018, Eritrea has established new relationships to restore our belief in good neighborliness.

Eritreans have gained powerful lifetime experiences that help transform them to be able to use their fullest potential. The strength of the people has been demonstrated by their will to never surrender their dignity.

What independence must now mean to us in practical terms is the continuation of the revolutionary process that yielded it. Eritrea is currently preparing to celebrate the 30th anniversary of independence under the theme “Resilient– As Ever” ceremoniously. While celebrating, we are also mindful of the sacrifices paid for our dignity.

Tips to make the fashion style look great on people

Tunisia-Date of the second dose of Moderna vaccine

Announcement from the Ministry of Health – Eritrea Ministry Of Information

“Aim for the moon; if you miss, you will land among the stars” – Eritrea Ministry Of Information

Enhanced Interactive Dialogue on the Situation of human rights in the Tigray Region of Ethiopia; 13 September 2021 – Eritrea Ministry Of Information